​During Liberia's 2014 Ebola epidemic, Playing to Live was formed through community collaboration and a mission to respond to the adverse effects of the Ebola Epidemic. Playing to Live's therapeutic expressive arts program reached 870 children in a large scale 5-month and 3-month program, which began 2 months after the 5-month treatment group began. The program was implemented by our Liberian partner RESH and was facilitated by 40 female Ebola survivors. Click here to learn more about our program in this publication.

Research
Analysis of pre- and post-tests showed a significant decrease in post stress symptoms for both treatment groups (TG1 & TG2). The treatment group receiving 5-months of treatment had a more significant decrease of symptoms than the treatment group receiving 3-months of treatment. This indicates that the longer the program intervention, the more effective the program. Analysis also shown that the stress symptoms increased during the 2-month waiting period of TG1 and TG2, which supports the idea that a mental health and psychosocial treatment should be provided to children as soon as possible following a traumatic event. 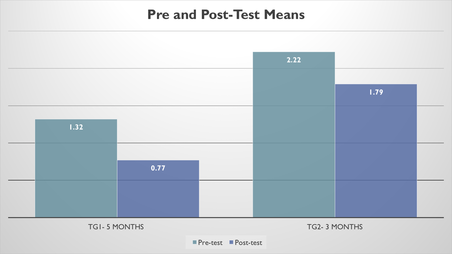 In 2015, Playing to Live was awarded a UNICEF grant to support Playing to Live programming and our partners RESH to work in Liberia with Ebola survivors. With funding from this grant, we accessed 800+ children and trained 40 female Ebola survivors in supportive art activities and trauma care. In 2016, we secured funding through private donors to support efforts throughout 2016 to expand programming and scope of services. This donation in itself has given us the opportunity to expand beyond anything we could have imagined.
​Special thanks to our partner RESH for implementing this project, UNICEF for funding, and the Liberian Ministry of Health and Social Welfare for the support.